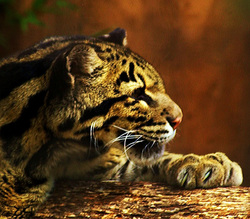 Clouded leopard is not a leopard but a relative of the extinct saber toothed tiger.


It has long been known that the clouded leopard has the longest upper canine teeth for its skull size of any modern carnivore, causing some people to compare the cat with the extinct saber-toothed cat.

Recent research into the skull characteristics of both living and extinct cats has revealed that the clouded leopard has a skull unlike any other cat today. In a number of respects it bears distinctive resemblance to the primitive saber-toothed cats.

The Clouded Leopard is a medium-sized cat found in Southeast Asia. It has a tan or tawny coat, and is distinctively marked with large, irregularly-shaped, dark-edged ellipses which are said to be shaped like clouds. This unique appearance gave the mammal both its common and scientific species name (nebulosus is Latin for “cloudy”). The Clouded Leopard was confusing to scientists for a long time because of its appearance and skeleton. It seemed to be a cross between a big cat and a small cat. The scientific name of the genus, Neofelis, originates from neo, which means “new”, and felis, which means “small cat”, so it literally means new kind of small cat.

The average Clouded Leopard typically weighs between 15 and 23 kg (33 to 50 lb) and has a shoulder height of 25 to 40 centimeters (10 to 16 inches).This medium sized cat has a large build and, proportionately, the longest canine teeth (2 in, about the same as a tiger’s) of any living feline. These characteristics led early researchers to speculate that it preyed on large land-dwelling mammals. However, while remarkably little is known about the natural history and behavioral habits of this species in the wild, it is now thought that its primary prey includes arboreal and terrestrial mammals, particularly gibbons, macaques, and civets supplemented by other small mammals, deer, birds, porcupines, and domestic livestock.


As might be expected from the fact that some of its prey lives in trees, the Clouded Leopard is an excellent climber. Short, flexible legs, large paws, and sharp claws combine to make it very sure-footed in the canopy. The Clouded Leopard’s tail can be as long as its body, further aiding in balance giving it a squirrel-like agility similar to the Margay of South America. Surprisingly, this arboreal creature can climb while hanging upside-down under branches and descend tree trunks head-first.
Behavior
Like all wild cats, clouded leopards are carnivores. They are thought to hunt a variety of prey including birds, squirrels, monkeys, deer, and wild pigs. It was once thought that clouded leopards hunted while climbing. Current thought, however, is that while some hunting may occur in the trees, most likely takes place on the ground. Trees are thought to provide resting habitat during the day.

Virtually nothing is known of the social behavior of wild clouded leopards. They are likely solitary, like most cats, unless associated with a mate while breeding or accompanied by cubs. Likewise, activity patterns are virtually unknown. Once thought to be exclusively nocturnal, evidence suggests that they may show some periods of activity during the day as well.

Clouded leopards are sexually mature around the age of 2 years. Mating can occur in any month, but in captivity most breeding occurs between December and March. The gestation period is between 85 and 93 days with 1 to 5 cubs produced per litter. Cubs are independent at approximately 10 months of age. Females can produce a litter every year.