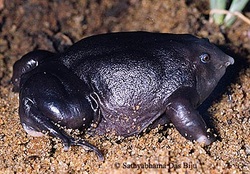 100 million-year old species discovered in Idukki district of Kerala in 2003 The purple frog is a living fossil and was initially assigned to a new family of its own, Nasikabatrachidae, buthas been more recently assigned to the family Sooglossidae which is found on the Seychelles islands.Being a member of the family Sooglossidae, the species’ origins lie in close consort with the Seychelles islands where the family was previously solely known from. The origin of the disjunct distribution goes back to about 100 million years ago, during which time India, the Seychelles and Madagascar formed a single landmass which split due to continental drift.

The body of the Purple Frog is shaped similarly to that of most frogs, but is somewhat rounded compared to other frogs. Its arms and legs splay out in the standard anuran body form. Compared to other frogs, it has a small head and an unusual pointed snout. Adults are typically dark purple in color. The specimen with which the species was originally described was seven centimeters long from the tip of the snout to the tip of the urostyle. Also, its cry sounds more like one from a chicken.

The species was discovered in the Idukki district of Kerala by S.D. Biju from the Tropical Botanic Garden and Research Institute in Palode, India and Franky Bossuyt from the Vrije Universiteit Brussel (Free University of Brussels). However it was well known to the local people before and several earlier specimens had been ignored.

Earlier thought to be restricted to the Western Ghats south of the Palghat gap, new records have extended its known range further north of the gap.

The frog spends most of the year underground, surfacing only for about two weeks, during the monsoon, for purposes of mating. The frog’s reclusive lifestyle is what caused the species to escape earlier notice by biologists.

Unlike many other burrowing species of frogs that emerge and feed above the ground, this species has been found to forage underground feeding mainly on termites using their tongue and a special buccal groove. They show inguinal amplexus (male clasping the female from behind) when mating afloat in temporary rainwater pools.

The scientific name derives from the Sanskrit word nasika (nose) referring to the pointed snout, batrachus Greek for frog, and Sahyadri as the local name of the mountain range where it was found – the Western Ghats.

This species is endemic to the Western Ghats in India, and is known from only two localities in the Idukki District in the Cardomom Hills, Kerala at an altitudinal range of 850 – 1,000m above sea level. These two areas are Kattapana and near Idukki town. It might occur more widely, but it seems that other reported localities probably refer to currently undescribed species.

The purple frog is thought to be a rare species, although it is very hard to find which makes any population estimate difficult to determine. Only 135 individuals have so far been observed, and of these only three have been females. The plantation workers within the range of this species have reported that this frog is uncommonly found when they are cutting trenches during the monsoon period (June to October).

The purple frog is listed as Endangered in the IUCN Red List of Threatened Species because its extent of occurrence is less than 5,000 km sq., all individuals found are in fewer than five locations, and there is a continuing decline in the extent and quality of its habitat in the Cardmom Hills, Western Ghats.The main threat to the purple frog is believed to be ongoing forest loss for coffee, cardamom, ginger and other species for cultivation.

Possible Indian odysseys: three models of the position of Africa 65 million years ago. a, India separated by large expanse of water b, limited land bridge between Africa and India c, connections between Africa, India, Asia and Madagascar.