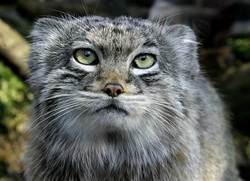 An exotic and rare feline, Pallas’s cat is a small size predator of Central Asian mountains, found only in the Ladakh region in India.
It is named after the naturalist Peter Simon Pallas, a German zoologist and botanist who worked in Russia who first described the species in 1776. Pallas’s Cat is the oldest living species of the modern genus felis .
The pallas’s cat is a small, long tailed cat with a broad head, low forehead and short widely – separated ears. Pallas cat is small in size, weighing between 2 – 4.5 kg. and has a grey to ruddy grey coat. Its legs are short and striped. The forehead is spotted and the tail is bushy and striped. Pallas cats are adapted to cold, arid environments and have a wide distribution through Central Asia, but they are relatively specialized in their habitat requirements. Pallas cat is chiefly crepuscular and feeds mainly on pikes and rodents. Birds and insects also form part of its diet. Pallas cats are seasonal breeders, with most litters being born between April and May. Four to five kittens (sometimes up to are born in a litter. Their gestation period is of 66 – 75 days. They are found in stony, alpine desert and grassland habitats but are generally absent from low land sandy desert basins except along river courses. They are found at altitudes up to 4,800 mts. Globally, its distribution spans the cold arid regions of the Central Asia. The northern cold desert region of Ladakh in India is its southernmost distribution

Pallas’s Cat is the oldest living species of a clade of felids that includes the modern genus Felis. This feline, along with the extinct Martelli’s Cat, were the first two modern cats to evolve from Pseudaelurus approximately 12 million years ago.

This cat has several features which distinguish it from other felines. Most strikingly, it has round pupils. Its legs are short, its rump is rather bulky, and its fur long and thick. The combination of its stocky posture and thick fur makes it appear especially stout and plushy. Its coat changes with the seasons: the winter coat is greyer and less patterned than the summer coat. The ears are set low and give the cat a somewhat owl-like appearance. Because of its relatively flat face, it was once thought that Pallas’s Cat was the ancestor of the Persian cat breed.
Pallas’s Cat inhabits the Asian steppes up to heights of 4000 m (13,000 ft). They are thought to be crepuscular hunters and feed on small rodents, pikas and birds.
The Pallas’ cat is similar in size to a housecat. A thick coat of shaggy fur and a long, bushy tail help combat extreme temperatures that reach lows nearing -60°F. Pallas’ cats take shelter in marmot burrows, caves, and rock crevices.
Fact File