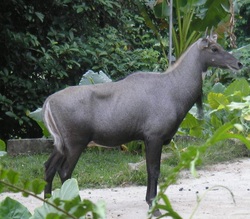 
Hindi word Neelgai (Nilgai) refers to the bluish color of the adult male, and therefore Blue Bull is another name for the animal. Neelgai probably evolved in open, dry Indian forests during the Tertiary geological period. Nilgai are classified as bovids (family Bovidae), and with their close relative, the Four-horned Antelope Tetracerus quadricornis, are the only living representatives of the tribe Boselaphini.


Neelgai is the largest of the Asiatic antelopes. They have a life expectancy of 20 -30 years, most of which they prefer to spend in open jungles and scrubby grasslands. Adult bulls weigh about 220 kg, while the cows weigh about 180 kg and calves about 7 kg at birth. The blue-gray adult bulls have black legs, and some may be brown-tinged, particularly younger bulls. Cows and calves are fawn or pale brown. All have similar dark and white markings on their ears and legs. Only the males have horns, which are black-coloured, short (about 18 cm), sharp, and bi-curved. The hair of adults is thin in density, wiry, and somewhat oily. Their skin is thick, particularly on the chest and neck of the bulls, where it forms a dermal shield. The eyesight and hearing of Neelgai is quite good but their sense of smell less acute. They have good speed and endurance.

Neelgai make several low-volume vocalizations, including a short, guttural “bwooah” when alerted. Calves may bawl and may make a grunting sound while nursing. In India, Nilgai occurs from the foothills of the Himalayas southward to Mysore. They live on a variety of land types from hillsides to level ground with scattered grass steppes, trees, and cultivated areas, but not in thick forests. Their habitats are characterized by paths, water holes, defecation sites, and resting cover. Neelgai were common in India during
the 1880s and were hunted for sport by the British. Besides man, the tiger is their main predator. In the 1980s Neelgai had drastically declined because of shooting and loss of habitat.

Neelgai segregate into male and female groups except during the breeding season. Bulls do not maintain a fixed territory but defend a space around themselves. Fighting occurs between dominant bulls, and serious injury or death sometimes results. Neelgai make dung piles by defecating repeatedly on the same sites. The social and territorial significance of this habit is not known. Some breeding takes place year-round. At that time breeding groups of one dominant bull and one to several cows are found. The peak calving period is September through November. Neelgai breed at age two to three years, whereas males may not mature until their fourth year. The gestation period is approximately 245 days. Twins are common, and triplets occur occasionally.

Neelgai eats mainly woody plants supplemented by agricultural crops. Their diet includes herbs and plant parts (flowers, seeds, fruit, leaves, stem tips). In the absence of preferred food they readily alter their diet. In India they share certain diseases with livestock and wildlife. Perhaps the most universal of these are foot-and-mouth disease and malignant catarrhal fever.
Nilgai pursued by dholes, as drawn by Robert Armitage Sterndale in Denizens of the Jungles, 1886


Status
Nilgai antelope has been listed in the ‘Low Risk’ category by the IUCN. The estimated population of Nilgai in India is approximately 100,000. The main threat to the Neelgai is from the destruction of its habitat to accommodate the ever-swelling human population.
Tidbits
Blue bulls generally come to the same place to deposit their droppings.
Blue bull can survive for a long period of time without water.
Nilgai was introduced in Texas in 1920′s.In India, it is believed that the Nilgai antelope is a sacred animal (precisely a cow) and it is protected against hunting.