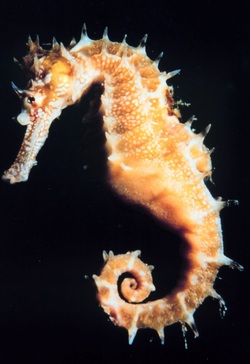 The Pregnant Male !!!Seahorses are among the only animal species on Earth in which the male bears the unborn young. Male seahorses are equipped with a brood pouch on their ventral, or front-facing, side. When mating, the female deposits her eggs into his pouch, and the male fertilizes them internally. He carries the eggs in his pouch until they hatch, then releases fully formed, miniature seahorses into the water.When people first hear about seahorse male getting pregnant, the question that naturally follows is, “So what makes them male?” The simple answer is sperm. The distinction between scarce round eggs and prolific tadpole-like sperm is essentially all that separates woman from man.
This delicate, diminutive creature (size of a tea cup) has enchanted people for thousands of years. It was Aristotle, the Greek philosopher who first wrote about the unusual habits of the Syngnathidae family in the third century BC..In ancient Rome, the people believed that when Neptune, the god of the ocean, traveled, he swished through the water in a chariot drawn by gigantic, enchanted horses who could breathe underwater. When fishermen first saw the minute sea horses, they thought that they must be the offspring of Neptune’s horses, and they were fascinated with the little creatures.Now we know that sea horses are, of course, not horses at all, they are merely a unique kind of fish. But these petite sea creatures with the elongated snout still seem as magical to us as they were to the ancient Romans.They are playful and graceful, and divers often stop to watch these marvelous creatures frolic around in the depths of the sea. HabitsSea horses don’t have scales the way that many other kinds of fish do. Instead, they have bony plates underneath their skin, like a small suit of armor to protect them from harm. There are numerous different kinds of sea horses, and they come in varying colors and sizes. Sea horses can be very tiny, and some are no larger than the length of the fingernail on your pinkie finger. Many types of sea horses have a unique way to camouflage themselves and hide from their enemies. Some can change colors, and chameleon-like, blend in with their surroundings. Some sea horses look so much like their surroundings that it is difficult to see them unless one is looking closely, and this helps to hide them from predators. One kind of sea horse even grows hair-like skin extensions so that they will blend in with the plant life whose fronds wave gently in the water of the ocean. Seahorses have no teeth and no stomach. Food passes through their digestive systems so quickly, they must eat constantly to stay alive

It is the male, not female, sea horses who are impregnated, and they can have up to 1500 babies at one time. Males have a special patch or pouch on their belly that provides incubation for the female’s eggs. The female transfers the eggs to the male’s pouch, and they then attach to the wall of the male’s pouch. After the male fertilizes the eggs, they are retained within the brood pouch to develop. When the young hatch, the male expels them from the pouch and they emerge looking like miniature versions of the adults. During the entire pregnancy, a mated pair of sea horses will dance in the water together every day just after the sun has risen. Scientists have speculated for years on the reason for this, but no one really knows why the sea horses execute this peculiar, beautiful greeting dance.

They are found in shallow, coastal, tropical and temperate waters from about 45°S to 45°N. They inhabit many ecologically sensitive aquatic habitats, including coral reefs, sea grasses, mangroves and estuaries, with most species in the Indo-Pacific and western Atlantic regions. Sea horses primarily occupy inshore habitats in narrow strips along the coast and prefer shallow waters (< 15 m depth), but have been encountered in shallow rock pools. Many temperate and tropical sea horse species inhabit sea grass meadows, while others inhabit mangrove ecosystems and coral reefs. In medicine

Ironically, it is their very popularity that places them in danger, as they are sought in large numbers for use in traditional medicine, aquarium fish and curios (souvenirs).

Seahorses are used as an ingredient in traditional medicine, particularly in southeast Asia where traditional Chinese medicine and its derivatives (e.g. Japanese and Korean traditional medicine)are practiced and have been used perhaps for about 600 years. Seahorses are credited with having a role in increasing and balancing vital energy flows within the body, as well as a curative role for such ailments as impotence and infertility, asthma, high cholesterol, goitre, kidney disorders, and skin afflictions such as severe acne and persistent nodules. They are also reported to facilitate parturition, act as a powerful general tonic and as a potent aphrodisiac.

It was conservatively estimated that at least 20 million sea horses (more than 56 metric tonnes) were caught for the traditional medicine market. In addition, more than one million live sea horses are caught for aquarium trade, mostly destined for sale in North America, Europe, Japan and Taiwan. The value of sea horses is quite high; the price of dried sea horses in Hong Kong markets ranges from Rs 11,500 to 50,400 (US$ 275 to 1200) per kg depending on the species, quality and size. About 50 countries are involved in sea horse exploitation.

India is one of the largest exporters of dried sea horses globally, exporting at least 3.6 tonnes (~ 1.3million sea horses) annually, and contributes to about 30% of the global seahorse trade. There is also a significant trade in sea horses as aquarium fishes,as supplements in some specialized cuisine and as curios. Sea horses are exploited both as an incidental catch (by-catch in trawl nets) and target catch, for export. Presently, the commercial exploitation of sea horses is being carried out from Tamil Nadu and Kerala coasts. Along Ramnad coast in Tamil Nadu, dried sea horse is used as a medicine to arrest whooping cough in children.

Goa– Maharashtra coast also indicated a similar usage. Demand for medicinal purposes has increased 10-fold during the 1980s and continues to grow at an annual rate of about 8–10% in China alone, predominantly due to China’s economic boom which promotes increased consumer-spending on traditional medicines.

Today, sea horse populations face an unpredictable future. They are not as yet on the endangered list, or even the potentially threatened list, but scientists and other experts are worried. Fishermen are catching far too many of them, and more of their underwater habitats are destroyed each day by pollution and other human carelessness.


Population data for most of the world’s 35 seahorse species is sparse. However, worldwide coastal habitat depletion, pollution, and rampant harvesting, mainly for use in Asian traditional medicine, have made several species vulnerable to extinction.

The hippocamp or hippocampus in Greek and often called a sea-horse in English, is a mythological creature shared by Phoenician and Greek mythology, though the name by which it is recognised is purely Greek; it became part of Etruscan mythology. It has typically been depicted as a horse in its forepart with a coiling, scaly, fishlike hindquarter.

(Bath)Homer described Poseidon, who was god of horses (Poseidon Hippios) as well as of the sea, drawn by “brazen-hoofed” horses over the sea’s surface, and Apollonius of Rhodes, being consciously archaic in Argonautica describes the horse of Poseidon emerging from the sea and galloping away across the Libyan sands In Hellenistic and Roman imagery. However, Poseidon (or Roman Neptune) often drives a sea-chariot drawn by hippocampi. Thus hippocamps sport with this god in both ancient depictions and much more modern ones, such as in the waters of the eighteenth-century Trevi Fountain in Rome surveyed by Neptune from his niche above.Poseidon’s horses, which were included in the elaborate sculptural program of gilt-bronze and ivory, added by a Roman client to the temple of Poseidon at Corinth, are likely to have been hippocamp.
References: Wikipedia, National Geographic, essortment.com, National Institute of Oceanography, Goa.
Powered by