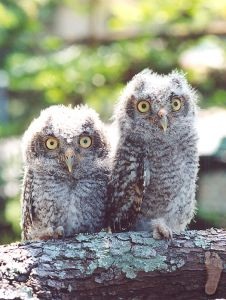 Sighted in the wild for the last time in 1884, it was rediscovered after 113 years in1997.Only 100 breeding pairs survive in the wild.

The Forest Owlet, Athene blewitti, had not been seen in India last in1884. The last confirmed record- a specimen in Britain’s Natural History Museum – was collected in 1884. Believed to have been extinct for over a century, 113 years to be precise, it was rediscovered by Pamela C. Rasmussen, Ben King and David Abbott at Shahada near Taloda in the Nandurbar district of Maharashtra (Toranmal Reserve Forest) in India in November 1997.

How this rediscovery came about is a fascinating story, involving theft, fraud, and international espionage. In the course of working on a field guide to the birds of the Indian subcontinent, ornithologist Rasmussen became aware of irregularities in the records of Colonel Richard Meinertzhagen, a World War I British spy and colorful character who early in this century owned what was generally considered to be the finest private collection of Old World birds in existence. Through painstaking research, she and her colleague, Nigel J. Collar of Birdlife International, were able to show that Meinertzhagen’s specimen of a Forest Owlet–which he had supposedly collected in 1914, was a fraud and had been taken from an existing 19th-century collection.

The species epithet commemorates F. R. Blewitt, the collector of the first specimen that was obtained in December 1872 from Busnah-Phooljan near Basna on the Phuljar highway in eastern Madhya Pradesh. The specimen was sent to Allan Octavian Hume who described it in 1873.

The Forest Owlet is small (23 cm) and stocky. It is a typical owlet with a rather unspotted crown and heavily banded wings and tail. They have a relatively large skull and beak. Unlike the Spotted Owlet, the Forest Owlet has the fewer and fainter spots on the crown and back. The upperparts are dark grey-brown. The upper breast is almost solid brown and the sides are barred with a white central wedge in the lower breast that is sometimes unmarked, especially in males. The primaries are darker and distinct. The wings and tail are banded with white trailing edges. A dark carpal patch on the underwing visible in flight. The facial disc is pale and the eyes are yellow.

Until its rediscovery in 1997, this owl was known from only seven specimens collected in the nineteenth century, in northern Maharashtra, and south-east Madhya Pradesh/western Orissa. In November 1997 a group of American ornithologists, including Pamela C. Rasmussen, rediscovered the species in foothills of the Satpura Range, north-east of Bombay. In 2000 a survey of 14 forest areas across its former range located 25 birds (using call playback) at four sites in northern Maharashtra and south-western Madhya Pradesh, including three pairs at Taloda Forest Range and seven pairs at Toranmal Forest Range. No birds were found in a brief survey of its former eastern range in Orissa. More recently survey efforts in the Satpura Range added another five sites. The species was also reported from the Chatwa and Padwa forests near Andhra Pradesh by K. S. R. Krishna Raju

These owls typically hunt from perches where they sit still and wait for prey. When perched they flick their tails from side to side rapidly and more excitedly when prey is being chased.. When nesting the male hunted and fed the female at nest and the young were fed by the female. The young fledge after 30–32 days

The peak courtship season is in January to February during which time they are very responsive to call playback with a mixture of song and territorial calls.

They appear to be strongly diurnal although not very active after 10 AM, often hunting during daytime. On cold winter mornings they bask on the tops of tall trees. Filial cannibalism by males has been observed.

They make several different calls. These include a hissing call of short duration. The song calls are short and mellow unlike those of most owls.

The Forest Owlet remains critically endangered, and the current population has been estimated at about 100 breeding pairs. It is thought that this owl has always been rare. The original specimens were collected in dense jungle, and the recent sightings in more open forest may also represent a habitat. The forest in the plains in its range has been totally cleared, and there is pressure on the remaining forest resources.

Until recently, the best illustration of the Forest Owlet was the one above, which appeared in The Scientific Results of the Second Yarkard Mission, published in 1891. the illustration has several inaccuracies: the cheek patches are too dark and the breast is too barred; the belly, lower flanks, and undertail coverts should be completely white, not marked; the bands in the wing should be whiter; and the bill should be larger.
References: Wikipedia, Copperwiki, “Lost & Found” by Tim Gallagher.
Powered by