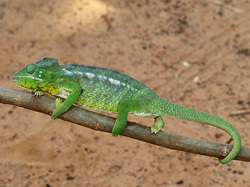 The Amazing Chameleon ! Apart from changing colours, it can focus each of the two eyes in different directions and observe two different objects simultaneously! The Indian Chameleon, Chamaeleo zeylanicus is a species of chameleon found in India, Sri Lanka, and other parts of South Asia. Like other chameleons, this species has a long tongue, feet that are shaped into bifid claspers, a prehensile tail, independent eye movement and the ability to change skin colour. They move slowly with a bobbing or swaying movement and are usually arboreal.

The ability to change colours has made these lizards famous. Strangely, they do not choose the background colour and may not even be able to perceive colour differences. They are usually in shades of green or brown or with bands. They can change colour rapidly and the primary purpose of colour change is for communication with other chameleons and for controlling body temperature by changing to dark colours to absorb heat. Though many lizards can change colour, chameleons have made an art, and we see them go from brilliant yellow through shades of green and brown, all the way to dark purple.

There is only one species of chameleons found in the Indian subcontinent, scientifically known as Chamaeleo zeylanicus. The term ‘chameleon’ is a combination of two Greek words, ‘Chamai’, meaning ‘on the ground/earth’ and Leon, meaning ‘lion’. Thus, ‘chameleon’ means ‘earth lion’. The foot structure, eyes and tongue of all the chameleons are the same.

The body of the chameleon lizard is covered with granular scales and measures upto 37 cm in length. Its feet are split into two main fingers, each of them attached with sharp claws that help in climbing trees. The bulging eyes are nearly covered by eyelids. The upper and lower eyelids of a chameleon are joined and there is a small pinhole through which the pupil can be seen. The chameleon can focus each of the two eyes in different direction and observe two different objects simultaneously.

One of the most interesting features of an Indian Chameleon is its extremely long tongue, which at times may exceed its body length also. The tongue is sticky at the end, which helps the reptile in catching prey. The moment the tongue of a chameleon hits a prey, it forms a small suction cup and draws the prey into the mouth. Chameleons do not have ears and vomeronasal (bone forming part of the middle partition of nose) organ.

The breeding season of the chameleon lizard falls around the month of October. Ten to thirty eggs are laid at a time and the gestation period is 3 to 6 weeks. Before laying eggs, the female chameleon digs a hole in the ground, between 4 to 12 inches deep, and deposits her eggs in that hole. The eggs hatch after a period of 3 months. Like all other lizards, they do not look after their young

Chameleon lizard survives on a diet of locusts, mantids, crickets, and other insects.

Chameleons are seen inhabiting almost all the parts of south India and west of the Ganges. However, they are rarely seen in areas that receive heavy rainfall. Chameleons are mostly arboreal and are found in trees or on smaller bushes.