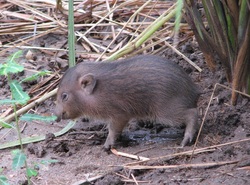 The smallest pig in the world is also more endangered than the tiger !
Only 150 animals survive in Assam.

The Pygmy Hog is critically endangered with less than hundred and fifty thought to be left in the wild. Once native to India, Bhutan and Nepal, these little guys were thought extinct from the 1950s-60s, until a small population was discovered. They can now be found only in the northwest Assam region in India. The pygmy hog is notable as it is the only surviving member of the genus Porcula.

The pygmy hog is a small wild pig weighing about 8.5 kg (10 lb). It lives in dense, tall grassland, where it feeds on roots, tubers and other vegetable matter, as well as insects and other invertebrates. Nests are built and used by both sexes at all times of the year. The pygmy hog is apparently non-territorial. It lives in small family groups of about 4 – 5 individuals, comprised of one or more adult females and accompanying juveniles, and occasionally an adult male.

The continuing decline of the pygmy hog is due to the modification and elimination of its limited habitat by human settlement, agricultural encroachment, overgrazing by domestic livestock, commercial forestry, flood control projects, and civil unrest among Assamese ethnic groups.
Pygmy Hogs are about 55 to 71 cm long and stand at 20-30 cm with a tail of 2.5 cm. They weigh 6.6 to 11.8 kilograms. Their skin is dark brownish black and the fur is dark. Piglets are born grayish-pink becoming brown with yellow stripes along the body length. The head is sharply tapered and they have a slight crest of hair on the forehead and on the back of the neck. Adult males have the upper canines visible on the sides of the mouth. They live for about 8 years, becoming sexually mature at 1-2 years. They breed seasonally before the monsoons giving birth to a litter of 3-6 after a gestation of 100 days. In the wild they make small nests by digging a small trench and lining it with vegetation. During the heat of the day they stay within these nests. They feed on roots, tubers, insects, rodents, and small reptiles.

The species was first described as the only member of the genus Porcula (Hodgson, 1847), but was then regarded as the closest relative of the Eurasian pig Sus scrofa and named Sus salvanius The resurrection of the original genus status and the species name Porcula salvania has been adopted by GenBank. The species name salvania is after the Sal forests where it was found.

The pygmy hog is the sole representative of Porcula, making the conservation of this critically endangered species even more important as its extinction would result in the loss of a unique evolutionary branch of pigs. They used to be widespread in the tall, wet grasslands in the southern Himalayan foothills from Uttar Pradesh to Assam, through Nepal and north Bengal. However, human encroachment has largely destroyed the natural habitat of the pygmy hog by development, agriculture, domestic grazing and deliberate fires. Only one viable population remains in the Manas Tiger Reserve, but even there threats due to livestock grazing, poaching and fire persist. The total wild population has been estimated as less than 150 animals and the species is listed as “critically endangered” Their rarity contrasts greatly with the massive population of wild boars (Sus scrofa) in India.

Conservation of the species has been hampered due to the lack of public support, unlike that for charismatic South Asian mammals like the Bengal Tiger or Indian Rhino. Local political unrest in the area has also severely hampered effective conservation efforts, but these conflicts have now ceased.